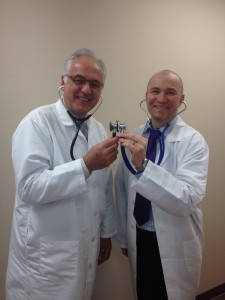 Highly trained and certified in both Europe and the United States, Dr. Vedad Seremet has over thirty years of experience in the field of medicine. He attended the Medical School of Sarajevo, Bosnia and Herzegovina, and practiced in Sarajevo until and during the war. Upon moving to the United States, he completed his Residency in Family Practice at the University of Louisville, where he was also a chief resident. Dr. Seremet has worked for Norton Immediate Care centers all around Louisville for 15 years in addition to starting his own practice.

Dr. Seremet’s son, Dzanan Gusic (Johnny) is our Nurse Practitioner. He has a Bachelors degree in Nursing from Spalding University, and a Masters degree in Nursing from the University of Louisville. Dzanan has worked in several units at the University of Louisville: SICU, CCU, MICU, ED, and the Burn Unit, and also Norton Immediate Care centers. Besides his role as the Nurse Practitioner for Town Family Doctor, Dzanan is also the office manager.